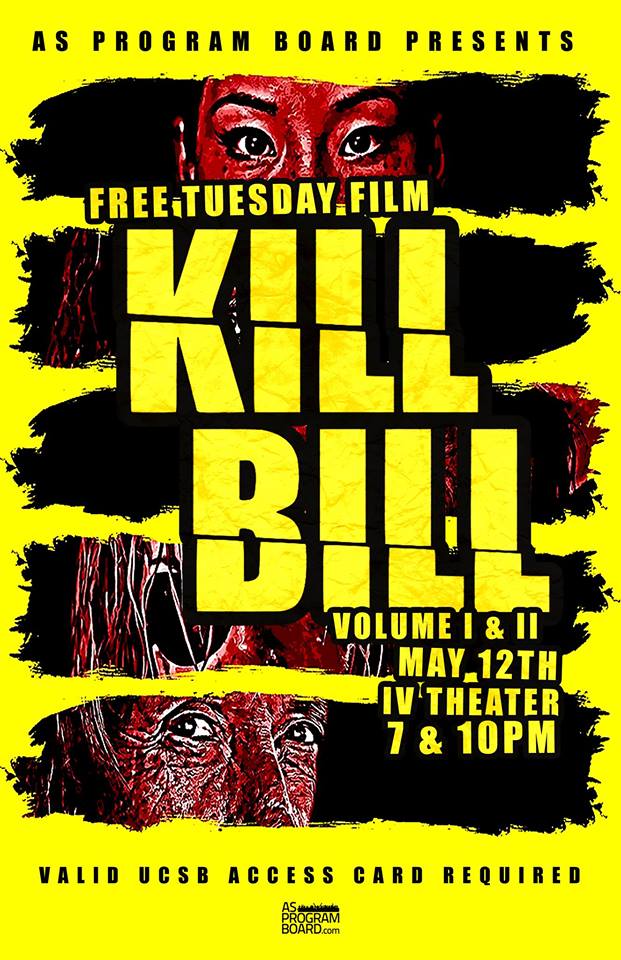 AS Program Board Presents… Kill Bill Vol. 1 at 7:00 pm and Vol. 2 at 10:00 pm in IV Theatre this coming Tuesday! Head out for Volume 1 or Volume 2 … or even both!! As always, access cards will be required for entry. Kill Bill : A former assassin, known simply as The Bride (Uma Thurman), wakes from a coma four years after her jealous ex-lover Bill (David Carradine) attempts to murder her on her wedding day. Fueled by an insatiable desire for revenge, she vows to get even with every person who contributed to the loss of her unborn child, her entire wedding party, and four years of her life. After devising a hit list, The Bride sets off on her quest, enduring unspeakable injury and unscrupulous enemies. Kill Bill Volume 2 : The Bride (Uma Thurman) picks up where she left off in volume one with her quest to finish the hit list she has composed of all of the people who have wronged her, including ex-boyfriend Bill (David Carradine), who tried to have her killed four years ago during her wedding to another man. Leaving several dead in her wake, she eventually tracks down Bill in Mexico. Using skills she has learned during her assassin career, she attempts to finish what she set out to do in the first place. Watch the trailers here: VOLUME 1: https://www.youtube.com/watch?v=7kSuas6mRpk VOLUME 2: https://www.youtube.com/watch?v=WTt8cCIvGYI ~ ~ SEE YOU ALL THERE ~ ~ :) :) :) :)