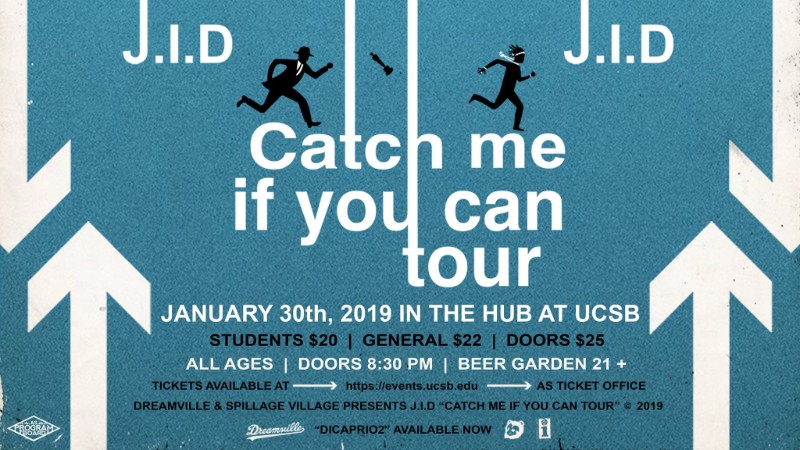 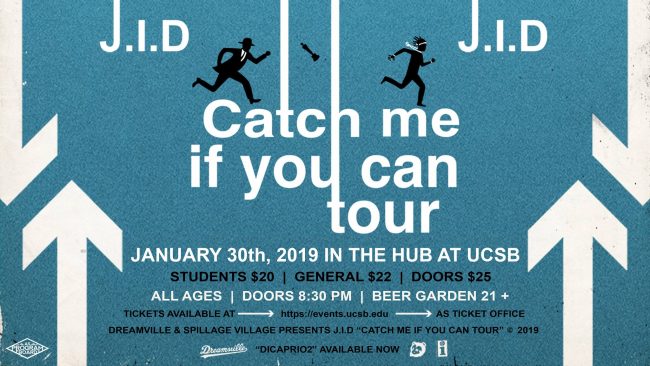 AS Program Board Presents… J.I.D “Catch Me If You Can Tour” In The Hub!

Born and raised in East Atlanta, J.I.D first appeared on the Atlanta hip-hop scene with his debut EP, Dicaprio, in 2015. Growing up, J.I.D was heavily influenced by his parents’ collection of classic funk and soul LPs. By 2012, J.I.D had dropped out of college to focus on his music, and in 2014 he headed out on what would be a productive tour with EarthGang, Bas, and Ab-Soul. Touring allowed J.I.D to craft his skills, and a year later he recorded and dropped the Dicaprio EP, which saw him team up with a host of producers, as well as EarthGang.

DiCaprio 2 is J.I.D’s second studio album, released November 26, 2018. The album will serve as the follow up to his debut album, The Never Story (2017), and a sequel to his extended play DiCaprio. For his album, J.I.D enlisted collaborators such as 6LACK, ASAP Ferg, BJ the Chicago Kid, Ella Mai, J. Cole, Joey Badass and Method Man. Production of DiCaprio 2 was handled by a variety of record producers, including Christo, J. Cole, Elite, Nice Rec, Hollywood JB, WondaGurl, Kenny Beats, Skhye Hutch, Ron Gilmore, ChaseTheMoney and the late Mac Miller among others.

TICKET LINK FOR GENERAL PRICE: https://ticketing.axs.com/Home.aspx?I=6LSPOgAAAAATbEzxAAAAAAB6%2fv%2f%2f%2fwD%2f%2f%2f%2f%2fBFVDU0IA%2f%2f%2f%2f%2f%2f%2f%2f%2f%2f8%3d Tickets can also be purchased at the AS Ticket office between the University Center and Multicultural Center as well as online at https://events.ucsb.edu/.